Recently, we had a giant St. Bernard dog into our facility. As most of you probably know, even though they are very friendly, St. Bernard’s are huge animals and incredibly strong. This dog needed a bath because St. Bernard’s tend to get dirty fairly quickly. With most smaller dogs one person can bathe them with ease and without issue.

About a month ago he had an appointment to get cleaned but he refused to even come through the door, so he had to be rescheduled for yesterday. The day before they arrived to do a trial run just to make sure he would be willing to enter the facility without making a scene. After much surprise he came inside and definitely got comfortable with our friendly staff.

So, when he came in for his appointment we had three people attempting to take care of his bathing because he is so large, he is literally the size of a pony. He managed to get in the tub without issue, as soon as he got the chance he lept out of the tub and in the process tore the tub out of the wall and ripped the faucet out. It created a huge mess and there was the hilarious image of a soaking wet St. Bernard roaming around our facility. If you can just picture it in your head, it is just as funny as it sounds. What a fun time we had with him. We love our big dogs! Especially, when they can create a laugh for us 🙂

Connect with us or give us a review

Your First Visit is FREE

Come and tour our facility anytime! Download application here and complete prior to visiting. A free Playgroup Compatibility Evaluation* will be conducted - Up to 4 hours.
*This evaluation must be completed prior to your first official Day Care playtime.

Half Day pricing is based on less than a 4 hour stay. Full day is over 4 hours. Please call for pricing of 3 dogs or more. 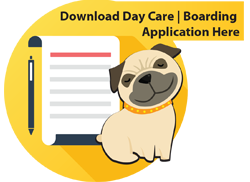